Imports Of Tiger Bones A Problem In U.S.

NEW YORK - Anthony Marr is on a crusade to save the tiger from extinction.

But his battleground is not south China or India or Sumatra, the tiger's traditional homes. It is here in the United States, where the lack of a strategy to stop the importation of elixirs made from tiger parts is an obstacle to saving the animal from disappearing in the wild.

"New York City is the only major city in North America that tiger bones are openly sold in spite of the existing law," said Marr, 55, the leader of the Western Canada Wilderness Committee that helped force the Canadian government in 1997 to strengthen laws to stop people from importing and selling tiger products.

Tiger parts have been used in traditional Chinese medicine for more than1,000 years to treat everything from skin disease and convulsions to laziness. As China's population has exploded and its people have become more affluent, demand has risen while the supply -- wild tigers -- has collapsed.

Tigers, which once roamed freely throughout Asia, now number about7,000, down from 150,000 a half century ago. Their range has shrunk to only a few national parks, mostly in India, which has been fighting a losing battle against the poaching that supplies much of the demand for tiger parts.

About two tigers die each day, at least one in India due to direct killing, pest control or habitat loss.

TIGER 'PURSUED IN THE BLACK MARKET'

"The tiger is a protected animal in India but it is highly pursued in the black market in southeast Asia and China because it is said to be medicinal," said Pranay Waghray, director of the Nallamalai Foundation for tiger preservation. The Nallamalai reservation has India's largest tiger population.

The problem is not limited just to Asia. The diaspora of the Chinese people means that many cities around the world have a Chinatown, and many of those Chinatowns have traditional Chinese medicine shops. Marr said many of those shops, even ones in the United States where it is illegal to import products made from endangered species, sell medicines made from tiger bones.

"At today's rate of poaching tigers will be extinct in a decade. Tigers don't have the time to wait for the Chinese community to change its habit," said Marr, who is of Chinese descent and has taken heat from other Asians for his campaign. On a recent day, he led journalists to New York's Chinatown, which has one of the largest concentrations of people with Chinese background in the United States, to buy supposedly banned tiger elixirs.

At the Golden Spring pharmacy on the Bowery in lower Manhattan, Marr walked right in and bought a vial of Tiem Ma tiger bone pills for $3.95.Tiem Ma pills, made by Guiyang Chinese medicine factory in China, listed6.8 percent ground tiger bones as one of its ingredients and claimed to treat rheumatic neuralgia, lassitude of tendons and back pain.

When journalists and photographers went into the store after Marr purchased the pills, clerks became visibly anxious, removed the pills from the counter and shoved them into a box. They refused to answer journalists' questions.

Marr said he expected U.S. legislators to strengthen the penalties and provide funding to enforce current laws to stop the traffic. Under the 1998 Rhino and Tiger Product Labeling Act, which bars importation or sale of products containing tiger parts, people caught with these products face a fine of $5,000. Business owners pay $10,000 and/or get six months in jail.

In comparison, fines for seal penises, also used in traditional Chinese medicine, are $100,000 for individuals and $200,000 and/or one year in jail for business owners.

The Interior Department's Fish and Wildlife Service is in charge of enforcing the law and monitoring importation of wildlife products.

While acknowledging that illegal tiger products are being sold in the United States, it argued that there are not enough law enforcement officers or funds to police the amount of illegal imports, estimates for which are hard to come by since the trade is underground.

The U.S. market is the largest for wildlife products in the world but the country has only 93 wildlife inspectors to cover 30 ports of entry. Another 230 special agents devoted to other environment-related trade provide part-time help.

"It's up to Congress to provide funds," Fish and Wildlife spokeswoman Patricia Fisher said. "The agency is very small and it's not up to the agency to get the money.

"To help reduce the use of tiger products in the United States, the wildlife agency has been working with Asian communities in Los Angeles to develop educational programs. Waghray said the best way to protect the tiger is to combat poverty in areas such as Nallamalai.

But Marr said putting an end to illegal trade in wildlife must begin in each country's backyard. "All that is needed are two or three people to clean up the neighbourhood if they concentrate on doing it," he said. 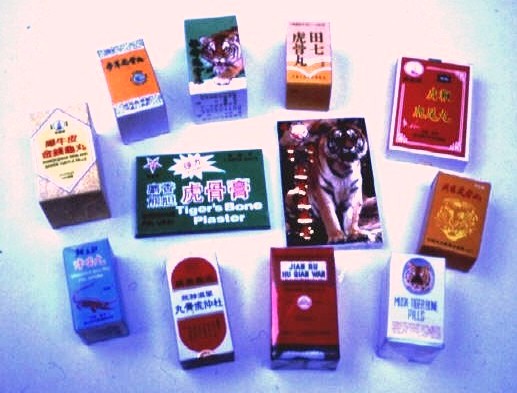 A P Kamath in New York

When Anthony Marr paid $ 4 and received an alleged arthritis cure in Chinatown early this week, he was not surprised.

Indeed, he would have been surprised if he could not find the tiger bone cure. For he had known for a long time that tiger bone remedies are widely sold in many Chinatowns in North America. Though officially the sale is banned, and the offenders could be fined $ 10,000, Marr had the gut feeling that hardly anyone was worried.

Anthony Marr is not just a lover of tigers. For several years he has served as one of the leaders of the Vancouver-based Western Canada Wilderness Committee, one of the most influential environmental and wildlife organizations in the world. Last year, he spent several weeks in India to study the efforts being made to increase the population of endangered tiger species. But he returned to Vancouver disillusioned at the killing of tigers.

Within a hour of his Chinatown tour, Marr said he found at least ten groceries selling tiger bones. Marr suspects most of the bones come from tigers killed by poachers in India.

"Tigers will be extinct in about 10 years if things won't change," he has been warning. His New York visit was to gain publicity for his cause -- and demand the government enforces the ban more efficiently.

But officials at the Fish and Wildlife Services, which is entrusted with the ban, concede they are too short-staffed. And to get the Chinese change their mindset about the alleged efficacy of tiger products is far from easy.

But Marr vows to continue his fight. He is thinking of starting a letter campaign to the federal agency in Washington.

The WCWC, which was started in 1980 by individuals who loved nature and animals, is asking for volunteers from ethnic groups across British Columbia and other Western provinces. The organization is currently setting up a "grassroots distribution team" where volunteers will take its educational newspapers to meeting places in their communities. It has produced 118 editions of free newspapers, published 11 books and several video films.

Its Tiger Show has been presented to more than 30,000 students in British Columbia and Calgary during last 12 months.

Marr can be reached at anthony_marr@yahoo.com

"At today's rate of poaching to supply the traditional Chinese medicinal market with body-parts of tiger, rhino and bear, among others, the tiger will be extinct within a decade, and the rhino and bear species thereafter." -- Anthony Marr

In response to a report in the tiger conservation publication TIGERLINK that a survey of 47 Chinese pharmacies in New York's Chinatown, 63% (30 shops) still offer tiger parts or products containing, or claiming to contain, tiger parts, Anthony Marr, Biodiversity Campaign Director of the Western Canada Wilderness Committee (WCWC), conducted a reconnaissance of Chinatown in conjunction with Wetlands and Animal Defense League activists during the first weekend in August.

What they found shocked them. Not only were pills claiming to be ground tiger bones openly on display, but leopard bone, seal penis, and pangolin (an African endangered animal species), were also available! Upon making these discoveries Wetlands issued a press release announcing a press conference to be held the following Monday morning to present the findings.

After the media conference, which was held in Wetlands downstairs lounge, Marr led journalists into Chinatown for a sting operation. While photographers and videographers positioned themselves out of site, Marr went to purchase endangered species products. However, as he was about to make the purchase, the store clerk saw the journalists and began clearing all endangered species parts from the shelves. But it was too late: the journalists had the proof they needed. What resulted was huge media splash, as the first wave of journalists, including the Associated Press, Daily News, Reuters, World Journal (the New York area's largest Chinese-language paper), ran their stories, resulting in a second wave of courage from journalists who saw the initial coverage, including a French-based world news agency, Fox News Channel, Radio Free Asia, and others.

In 1996/97, Marr conducted a similar investigation into the Chinatowns of Vancouver, Toronto and Ottawa, which made national news resulting in quick government response and a near-total elimination of these medicines from Chinatowns country-wide. As a person of

Chinese descent, Anthony is able to investigate the sale of endangered species parts in Chinese herb shops and traditional pharmacies without raising suspicion. In traditional Chinese medicine, it is believed that consuming the parts of an animal responsible for its strengths will pass that strength on to the consumer.

Wetlands and WCWC are currently pursuing this campaign to the next stage, working with the NY State Division of Fish and Wildlife Enforcement Division to prosecute business selling endangered species parts.

Posted by Anthony Marr at 5:36 PM No comments: