Is 2013 a good year to write a book? Well, 13 is my chosen number, so in this sense it is auspicious. But 2013 follows 2012, and that may not be all that promising, because by the time the book is ready to hit the shelf, book stores may have become extinct, or worse, literacy, or worst, humanity itself (best as some might deem), which ironically is what the book is meant to help prevent and save.

I've been writing it for the last 3 months or so, and expect to be doing it for another 3 or more, since I'm up to Chapter 51 of an estimated 100. My average speed is about one chapter every 1-3 days, with writer's blocks along the way. This explains why I haven't been quite as active on FB of late. I haven't announced the writing of this book abiding by my rule to not announce works in progress until at least half-done, which I believe it has. If not, the book will just keep on going. Shannon Wright﻿ bears first hand witness to the process. :)

To safeguard the book's foregone termination, or if banned or burnt, I might seal its original in a time capsule and launch it into the future. At least, then, whoever can still read in 2050 will know in some detail on a personal level what has transpired and is still transpiring in 1990-2020 that has contributed to their demise. Conversely, if there happens to be a Renaissance in 2050, the book hopefully could make a historical contribution and sit in a new museum somewhere.

[A Planet's Ransom] is a novel, in which a super-powerful psychopath of an oil-tycoon teams up with an ingenious psychopathic trophy-huntress to seek control of the destiny of a nation and the fate of the world, counter-balanced only by a civil/animal-rights attorney and an environmentalist/wildlife-preservationist.

Keeps me awake at night just thinking about it. :D 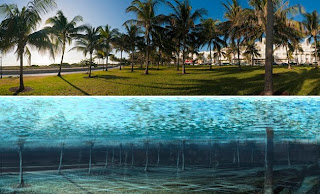 This is not conjecture. It is a past fact that 18,000 years ago, at the height of the last ice age, the sea level was DOWN some 110m/365', and the present-day Persian Gulf was the then fully exposed "Persian Valley", with the extended and combined Tigris/Euphrates River running through it.

(*Anthony Marr has published a "theory" that the Persian Valley was exposed for so long that a natural terrestrial ecosystem, including tribal humans, had developed, thrived and evolved upon it. When the sea rose to reclaim the land some 12,000 years ago, the tribes were driven up the valley into the present-day "Fertile Crescent"; the population compression and cultural amalgamation caused the rise of civilization. But that is another fascinating subject.)

The diagram shows Florida today and a few decades hence. It and Louisiana will be submerged almost in their entirety, as will other low-lying areas worldwide, e.g. Richmond and Delta in Greater Vancouver where I live. 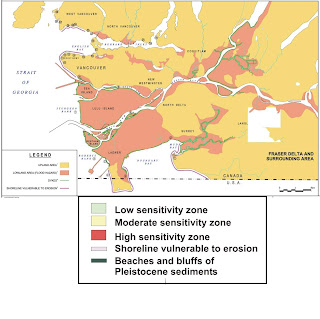 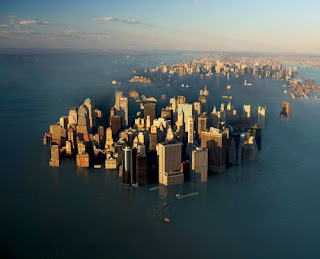 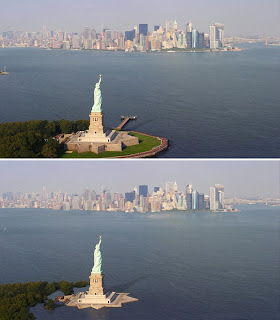 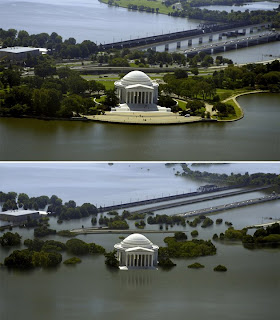 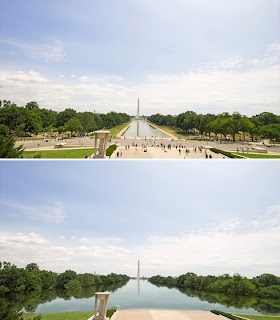 The above two maps show the land to be submerged (in red) at +6m/20' sea-level-rise. And the following map shows the new coastline after all the land glaciers have melted off. 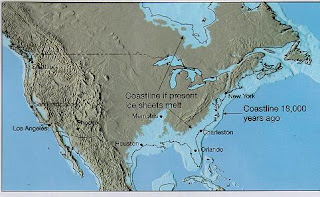 Posted by Anthony Marr at 11:41 AM No comments:

Imagine the starship Enterprise going into orbit around a planet "where no one has gone before", sending down a shuttle for a two-hour observation of the seeping open sore on the otherwise gorgeous face of that blue jewel, and Kirk, Spock et al watching the life-feed of the video uplink as we speak.

The following is better than Star Trek because, instead of watching them watching it on their screen, you can join them by watching it yourself on your own screen:

If this video is banned on youtube in your country, please watch it in Vimeo:
https://vimeo.com/69824640 (with or without engine/wind noise)

Alien's-eye-view of hellhole on Earth - Alberta Tar Sands from Anthony Marr on Vimeo.

A disclaimer: Anthony Marr is not a professional videographer, does not own state-of-the-art high-end equipment, and it was a stormy day and turbulent flight, so you won't see any Oscars in the stars for this one. What you will experience is what Anthony Marr himself experienced, and perhaps what Kirk and Spock et al would experience. It is a spiritual experience first and foremost.

Anthony Marr himself feels that the video does not do the tar sands justice for the planet-destroying atrocity that it is; for one thing it covers only two of the six mines. To emphasize a few points for maxing the benefit:

2. About as much energy, mostly natural gas piped in from as far as Russia, has to be put into the tar sands operations to extract an equal amount of energy in the form of oil, so in the ecological context it makes no sense; economically, it does but only to those who financially benefit from it. 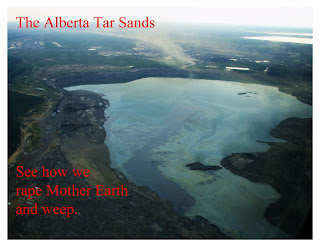 3. Other than the obvious, such as the wholesale "removal" of "overburden" (boreal forests) by the thousands of square kilometers, of special note are the highly toxic "Tailing PONDS" sitting poisonously throughout the landscape by the hundreds, which are essentially man-made toxic-waste dumps in the form of storage LAKES, some so large to be visible to the naked eye from space, and one boasting of having the world's third largest dam in the world. None of them is lined, so all of them LEAK, either down into the aquifer and/or directly into the over-used Athabasca River which drains into Lake Athabasca farther north. These tailing "ponds" happen to underlie the paths of migratory birds. Their contents are so oily and toxic that no water fowl landing into one can be expected to take off again.

4. Do the oil companies and the oiled governments care? Sure, one company claims to have "reclaimed" 22% of the land devastated by its gigantic Earth-raping machinery, but critics contend that it is in fact only 0.2%. Of course they have their little PR show-pieces.

5. The entire Athabascan watershed downstream of the mines has been poisoned - not just for now, but for centuries to come - and of course this is none of the oil companies' concern. The poisoned Lake Athabaska produces deformed fish upon which the local Chipewyan people feed, or used to feed, resulting in sky-high cancer rates. Who knows what evils would befall the animals drinking from the entire watershed, much less the toxic-cocktail directly from the tailings ponds? By the way, though they did suspend the doctor who blew the whistle on the cancer epidemic, they did magnanimously provided the Chipewyan people with a cancer ward.

If you haven't yet read the blog on Anthony Marr's Vancouver-to-tar-sands trip, or viewed the preceding video episodes (#1 through #13), please also check them out:
homosapienssaveyourearth.blogspot.ca/2012/03/aliens-eye-view-of-hellhole-on-earth.html

So, what do you think Captain Kirk and Mr. Spock et al would do after watching their video feed? Since they have to abide by the interstellar non-interference principle, what can they do? They'd just enter the video into their database under "Lost Cause". Which means, it is all up to us, folks. 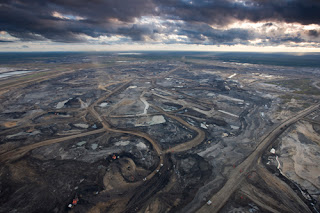 A friend of mine observed: "... (in this session) there was a discussion here about making a difference to the largest number of animals. I responded, 'But what about the tigers? the mustangs? which species we'll lose soon, shouldn't we as a movement go to those first?' The answer I got was that this viewpoint is 'conservationist' and that's different from animal rights. I did not see myself as a conservationist, only a concerned person..."

I second this person's emotion.

As an anti-hunting activist and wildlife preservationist over the years, I've caught flack along this vein time and again. One asked me how many tigers I was trying to save; I said 4000 max, since that was the maximum number of tigers left in the wild to save. He then chastised me for not only being misled, but misleading others, to devote a disproportionate amount of time, energy, ingenuity and resources to the tigers, thereby thinning out support for the 10 billion chickens slaughtered every year in the U.S. alone. Elephants likewise, rhinos likewise, dolphins likewise, whales likewise.

Speaking of whales, there was even the "Eat the Whales" campaign led by a high profile group essentially saying that each whale contains enough meat to equal that of so many tens of thousand of chickens, so by sacrificing one whale, so many tens of thousands of lives could be saved. Tongue in cheek perhaps, but this goes to show something about the basic "philosophy" of some in which the term "Species" does not exist except in labelling wildlife-oriented ARAs as "conservationists", whom they label as "sSpeciesists".

These "Quantitative ARAs", as I call them, in fact devalue the worth of the individual life by playing the life-game by the number, which I find ironic if not disingenuous. 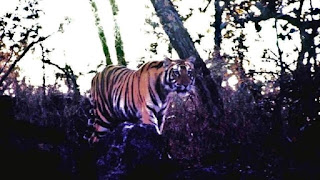 Posted by Anthony Marr at 1:22 PM No comments: 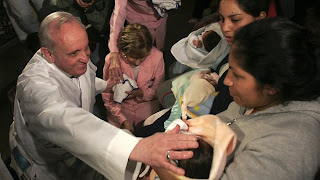 From Grade 7 to Grade 11, I attended a Roman Catholic school in Hong Kong run by Irish Jesuits. I agreed and disagreed with many things taught, and was appalled by the Inquisition, but one thing I did hold dear, and still do, and have been heavily influenced by, was the Vow of Poverty taken by the priesthood, which I deemed in accordance with Christ's teaching, and how the priests truly lived a life of "Imagine No Possessions".

But when I looked up to the Vatican, to which all possessions belonged, the Vow did not seem to apply. And its link with the Mafia was most unbecoming, to say the least. I see no way for a money-influenced cleric to be in anyway spiritual, much less to be in a position of spiritual leadership.

I recall the film "Shoe of the Fisherman", with a newly crowned pope played with palpable humility by Anthony Quinn, who defied the entire Establishment and gave away the immense material wealth of the Church (accumulated by truly evil means during the Middle Ages) to the masses and the poor. In this imaginary landscape, I saw a ray of hope.

And now, seeing Pope Francis living in a sparsely furnished apartment rather than the Papal PALACE, and staunchly bypassing extravagant protocol back to the bare bone basics, I recognize a faint resemblance to the idealized Quinn visage, with a dash of genuine smile thrown in, and despite my deep-rooted misgivings feel nonetheless somewhat hopeful for the spiritual revolution so sorely needed by religion itself for staying anywhere near being relevant to this hyper-materialistic world. 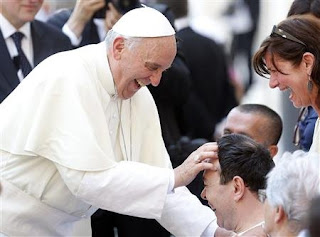