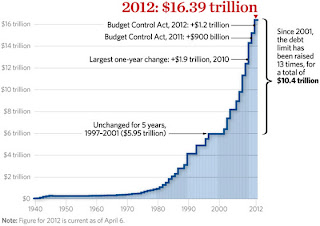 Questions:
1. Would you want to be a part of this family?
2. Is this situation sustainable?
3. Can the planned $850 spending cut save the family from financial ruin?
4. What will happen to the family if the interest rate rises to 5%, raising the interest from ~$3000 to ~$8,000?
5. What will happen if no lender would lend this family any more money?
6. Regardless, is bankruptcy the inevitable outcome?
7. If so, how imminent is the end?

The answer to the first question is: Whether you want to or not, you are a part of this family, and this family is called America - just add 8 zeros behind the numbers.

Of course this is a simplified analogy. On the national and international levels there are other factors at play. Following is how America has been and is dealing with the situation, and what probably will happen:

1. The Federal Reserve (central bank) has been printing billions of dollars out of paper on a daily basis to "finance" the government expenditure, including paying the interest on the $16.3 trillion national debt to maintain its credit rating so that it could borrow more. But in doing so, it devalues the USD domestically.

2. The Federal Reserve has been keeping the interest rate at rock bottom to minimize for the government the interest to be paid.

4. Due to the US Dollar still being historically the World Reserve Currency, foreign governments have accumulated large quantities of USDs in cash and bond for international trading purposes (e.g. China has stockpiled about $2 trillion in USDs and Japan $1 trillion). But over the last year or so, powerful countries have been signing bilateral trade agreements with their trading partners, e.g. Brazil, Russia, India and China (the BRIC countries), as well as the E.U. and even the O.P.E.C. countries, in their own currencies, especially the Chinese Yuan, instead of the USD. So in truth, the USD has to a significiant degree been displaced. If and when this becomes prevalent, or even widespread, the USD held by various countries will become extraneous, and they will tend to sell it for, say, gold. If and when enough countries sell their USD holding, the USD will plummet.

5. In order to discourage the other countries from selling their USD holdings, the US Federal Reserve will have to raise the interest rate to, say, 5% to make US bonds more attractive to their holders. But in doing so, the interest to be paid by the US government will rise accordngly, from ~$300 billion a year to ~$800 billion a year. The US deficit will worsen by ~$500 billion a year, necessitating the US to borrow ~$1.8 trillion rather than the ~$1.3 trillion.

6. However, if those countries holding large amounts of USDs sell their USD holdings too quickly, it would depreciate the USD precipitously, thus reducing the worth of their holding, so they are not likely to do so, but this would depend on the domestic value of the USD. If, due to the unbased printing of vast quantities of paper dollars the USD devalues by 2%, the USD-holders will require a higher interest rate than 2% on their US bonds to just break even, which will force the Federal reserve to raise the interest rate to prevent massive selling of the USD in the domestic and international arenas.

7. Rising interest rates will raise the cost of private sector borrowing, the cost of doing business, and retail prices, resulting in inflation. It will depress many sectors of the US economy, including manufacturing, energy, transportation, real estate and retail sales. It will cause many companies to downsize or fold and increase employment. On the federal level, revenue will fall, expenditure will rise, debt interest will balloon, the deficit will burgeon, and the national debt will tower even more.

8. The American mind set of maintaining itself as the world's pre-eminent military power, outspending the next 17 nations combined, including quadrupling the Chinese expenditure, will continue to cost the US $700 billion every year which the economy could ill afford, with little to show for an economic return. This alone will drive the US into an economic dead end. The only way for the military to pay for itself is to be used to seize foreign assets, including oil, which could ignite World War III.

9. In the short run, the improving US energy self-sufficiency may hold the economy steady, but since it is concentrated in the fossil fuels, i.e. all but ignoring green energy sources R&D, it will exact a substantial environmental cost. Further, the fossil fuels are not infinite and will be exhausted in the foreseeable future, at which point there will be no significant alternative energy to sustain the economy nor take over from the fossil fuels physically. And at the rate of energy consumption, the end, when it comes, will be sudden and calamitous. Even if the US takes over Canadian resources by force, it will be just to delay the inevitable.

10. Finally, environmental factors have to be factored into the equation. Climate change, especially drought, has already been decimating and will continue to decimate US food production, and violent weather events will impose a huge restitution cost. If/when food falls short on US soil, and no other country has its own food surplus for importation into the US, social chaos could result, which in itself could devastate the economy.

Through this scenario, there will be a slow and gradual decline, but not a precipitous collapse. IMHO, if the collapse does occur, it will be caused overseas. For the moment, the US being the top consumer of Chinese goods, a collapse of the US economy will cause a corresponding recession of Chinese manufacturing. So it would be against Chinese interest to cause a collapse of the US economy. But if/when the USD declines past a certain point, US economy becomes depressed enough, American consumption of Chinese goods falls below a certain critical threshold, and the Chinese Yuan attains an equal or greater international stature, it could cause other countries to exchange their USDs for the Chinese Yuan, or for gold. China may do so itself. This then could be the trigger for a full blown American economic collapse.

The US has been massively printing money ex nihilo to bolster its standard of living since 1971 when gold was cast aside as the solid foundation of the economy. It is the hugest economy bubble the world has ever seen, and as we all know, there is no bubble that would never burst - the bigger the bubble, the more destructive the result.

All in all, do I see a way out of this vicious cycle, this death spiral? Not if America carries on its present trajectory. The only way out is a radical departure from its current course, right down to the very way of life, and even its very way of looking at the world. The American standard of living, though not necessarily its quality of life, must be substantially lowered. The transition, though it will lead to a better countries and a sustainable world, will be rocky and painful. Ultimately, it must be recognized that a finite planet cannot support an infinite demand. 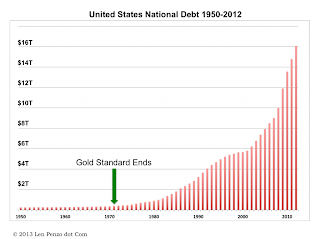 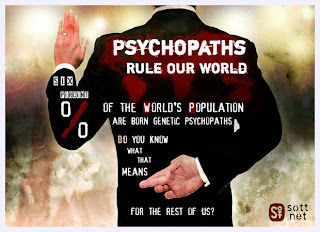 Some say 4, some say 6, so I'll take 5. It is the percentage of any given population who are psychopaths, or 1 in 20 - deviate humans without empathy, emotion, compassion, compunction, conscience, honesty, principle, remorse... How many crossed your paths today? How many do you know? How many in your life?

One common denominator is the quest for worldly power, and the most intelligent and ruthless walk over the backs of thousands to rise to the top. Are all at the top psychopaths? Of course not, but we can all name a few in the psychopathic majority. And the 95%, hampered by integrity, morality, ethics and love, have few options but to uphold humanity on the grassroots level, waving our placards to the blind eyes and shouting our slogans to the deaf ears of the power that be. And they control us all to do their bidding.

Ultimately, the entire world, from corporations to military to governments, whose characters are projections of theirs, is controlled by psychopaths. Mother Earth is their rape victim.

Psychopaths are genetically defined, for whom there is no cure. Is psychopathy specific to the human species? Is Homo Sapiens a product of genetic evolution gone horribly wrong? Do advanced extraterrestrials have psychopaths?

To the last question, my answer is a probable NO. Their worlds, when they were at the same stage of ours, could not have survived. If YES, then their own psychopaths had been overcome.

So, it seems to me, we have to overcome our own. How? Let me think some more. 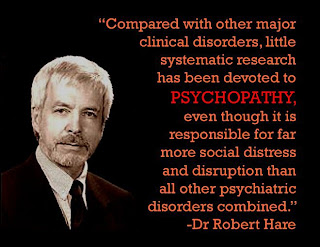