While Japan is infamous for its 1000/yr pseudo-scientific "Research" whaling and 22,000/yr dolphin slaughter, and Canada is notorious for its 300,000/yr Newfoundland seal hunt and the environmentally disastrous Alberta tar sands, the United States has an open secret, just as ugly, of wildlife exploitation that is little known to even those who have been fighting American-style trophy hunting for years.

In name, it is presented to the public by the consistently pro-hunting governments as "urban wildlife management". In fact, it is urban deer slaughter on a massive scale that is spreading like wildfire from city to city across the land. The executioners vary, from expensive sharpshooters who charge $300-$500 per deer, to cruel captive-bolt operators who attempt to shoot steel bolts into the thrashing head of the victim, often missing the brain and hitting the eyes, and, most despicable of all, bow-hunters, whose statistical non-lethal wounding rate approximates 50% of all deer shot. While the sharpshooters and captive-bolters do it for money, the bow hunters do it for fun, pure and simple. And by urban deer "culling" by how-hunters, we're talking about them shooting deer with arrows in people's backyards. In fact, almost all of the urban-deer-slaughters-by-bow-hunters are driven by the bow-hunting lobby/community/industry.

More often than not, the deer "overpopulation" problem, if/when it exists, is deliberately cultivated by the hunting community for an excessiveness of deer for hunting purposes, which then offers itself as the solution to the "problem" as a "favor" to the public. Case in point - The Trexler Wildlife Preserve in Allentown PA. After 70 years of no-hunting in the preserve with respect to the dying wish of General Trexler, they reopened the preserve to bow-hunting in the name of ecological protection of the preserve. On opening day, I went into the preserve with local activists Carol Loomis and Cheryl Baker, admidst hoards of hunters hefting lethal-looking compound bows and quivers of broad-head arrows. And what did we see? If I were blind-folded and driven into the preserve, then have the blind-fold removed, I would have guessed that I was in a farm. Acres of forest had been plowed down, with food-plots of deer clover planted there instead, row on row. Deer, when well nourished, will maximize their reproductive potential, giving birth to twins and triplets instead of none or singlets. And this is what the bow-hunters wanted, and did - wreck the forest, plant food-plots, max out the deer reproductive rate, claim ecological damage by deer overpopulation, offer themselves as saviors of the preserve, go in and shoot deer with bow-and-arrow. And we saw some of the results. 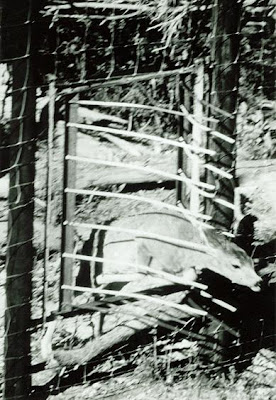 To find the perfect solution, the first thing to realize is that culling as a population control measure does not work. Take a piece of land with a carry capacity of, say 8 does. If it contains 10 does, their total fawn crop would be around 3 fawns, totaling 13 deer at the end of the year. Whereas, if the 10 does were reduced to 5 by culling, the remaining 5 does would produce around 8 fawns in total, resulting again in 13 deer at the end of the year. This is called the Compensatory Rebound Effect (CRE). The hunters know this, but the public does not, thus allowing the hunters to have their self-perpetuating way.

The civilized solution for the Trexler Preserve, even if there is ecological damage due to deer, is to first eliminate the food-plots, and practice birth-control of deer, as we do cats, dogs and humans. The technology of Immuno-Contraception (IC) is mature, technically ready for field application, and approved by the FDA (2007). Unfortunately, all governments on all levels, without a single exception that I've seen - and I've seen a lot in my last 6 Compassion for Animals Road Expeditions (CARE tours - see www.HOPE-CARE.org) - are not only pro-hunting, but run by hunters. The state policy of New Jersey , for example, is that of the 11 voting members of its Fish and Game Department at least 6 must be hunters, and in fact, all 11 were hunters the last time I checked. Hunters dread IC like the plague, and the governments have denied real world IC application since Day 1. However, due to the proven effectiveness of the IC technology, they seldom attack the vaccine itself, but its methods of delivery, citing expensiveness as the leading objection.

In this they are not totally wrong. The current methods of vaccine delivery are indeed expensive, often costing several hundred dollars per deer, when the vaccine itself costs less than $30 per dose. The remote delivery method (darting), is unreliable (e.g. dart hitting bone), labor intensive, incomprehensive (since not all deer can be approached within darting range), and tagging of vaccinated deer impermanent; it is also restricted to the single-year liquid vaccine, thus necessitating repeated annual applications. Multi-year pellets have to be manually injected by syringe, so deer have to first be captured. This is done currently by cage-traps. A cage trap can usually capture only one deer per day, often overnight, and sometimes it captures an already vaccinated deer. The deer will then have to be wrestled to the ground by two operators when a third will inject the vaccine. The trapping process and the physical handling have been known to be so traumatic as to cause heart-attacks in the deer. Thus, all in all, both methods leave a lot to be desired, and are both labor-wise very expensive.

In view of this, I have proposed an alternative method of vaccine delivery employing a device called the Deer-Auto-Assembler (DAA). This is a method of assembling deer I invented while working in deer control around India 's tiger reserves. It is simple, effective, labor-unintensive and therefore inexpensive, and eminently adoptable for vaccine delivery in North America . Basically, it involves creating a fenced area with one or more entrance one-way-gates around the perimeter, and one exit one-way-gate at the end of a narrow chute wide enough for only one deer at a time. Enticed by food, deer will enter the DAA through the entrance gate(s). After enough deer have entered, and it could take days without the need for human supervision, the entrance gate(s) can be locked, and the food can be moved to the end of the narrow chute right next to the exit gate. The chute should be draped in black fabric so that the deer will be calm and the human operator concealed from view. Near the food trough, where the feeding deer's rump would be, a U-shaped incision is cut in the fabric, creating a hole covered by a flap. When the deer is feeding, the flap is lifted, the pellet is injected, the tag is attached, and the deer is then free to leave the DAA through the exit gate. Other than constructing the DAA initially, very little human labor is needed to operate it.

Even without the use of IC, the DAA can still be employed to achieve its own end. Suppose the government says that the maximum allowable concentration is 20 deer per sq. mi., and the total area of a small city is 5 sq. mi., the maximum allowable deer population would be 100. If the total population is 110, the bow-hunters would clammer for 20 deer culled by bow-and-arrow in that city, leaving 90. This will create a food surplus, which will lead to a high reproductive rate, raising the total population back up to 110 or higher the next year, thus justifying another round of slaughter the next year, and the year after that, ad infinitum. With a DAA, no slaughter is needed, and no ecological damage is done. All that needs to be done is to allow 10 does to enter the DAA, and keep them there by supplementary feeding indefinitely. If no bucks are allowed in the DAA during the rut, the does would not reproduce. The outside population will be 200, their reproductive rate will be low, and no environmental damge is done. The DAA can be made visually attractive by constructing it half in sunlight and half in forest shade, to serve as a deer viewing facility. I have seen such deer viewing enclosures in which the setting is beautiful and the deer look healthy and relaxed.

All this said, I have to point out that we live in a conservative society in which "outside of the box" ideas are not readily accepted. The DAA concept is one such idea, and so far has not been taken seriously, even by some in the anti-hunting community. But if we want to defeat the urban deer slaughter, I strongly believe that the DAA is the perfect solution.