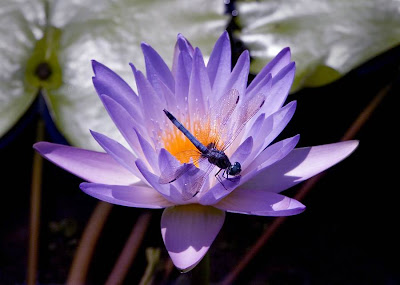 In the early morning of New Year's Day, he awoke from a dream that gave him a first clue of what this "inconceivable" Tao might be.

It would be strange enough for a human to dream of being a non-human - a lion maybe, an eagle, even a dragonfly, but of everything on Earth, he dreamed of being an amoeba, one living on the bottom of the pond beside which he was sleeping. 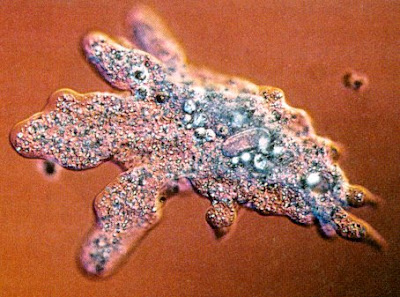 "He", the amoeba, had climbed up the stem of a bulrush, a “Stairway to Heaven” in amoebal lingo, for the pond was his universe, the realm beyond which being "Heaven". 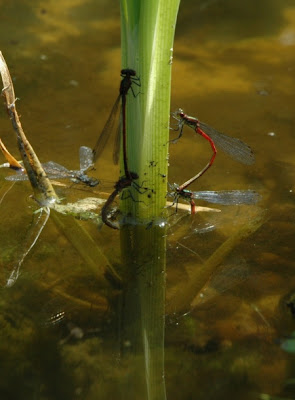 He was pushing as hard as he could to penetrate the water/air barrier, in vain. Finally, in frustration, exhaustion and resignation, he began his dispirited descent back towards his bottom-feeding, amoeba-eat-amoeba existence, when he heard, “What are you doing, my friend?”

He looked around and encountered a spherical being attached to the Stairway, glowing luminously in the filtered moonlight. Despite its being many sizes larger than him, it seemed benign, and he felt at ease.

“I'm trying to go to Heaven," he said, without shame.

"I'm glad you've failed, since you would have died had you succeeded." 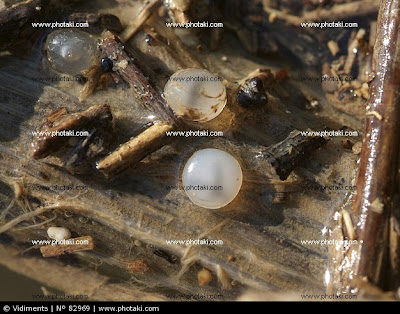 "An egg is a single cell that will develop into a multicellular organism."

"What is a, what you say, multicellular organism?"

"In the present context, it is something that, unlike you, can go to your Heaven - without dying in the process."

“I want so badly to go!" he lamented without reservation. "I'm tired of my mundane existence. I want to transcend to a higher realm and live with the gods!”

“I can appreciate the sentiment, but I’m afraid you are going about it the wrong way,” said the egg without condescension.

“Oh yeah? Well, if you know the right way, why are you still stuck in here, eh? At least I have some freedom of movement, unlike you!”

“I will be out of this pond before the next full moon.”

"You are quite sure of yourself, aren't you?"

"I know what will happen."

“By means of Integrative Transcendence."

"Two huge words. I can't handle even one of it."

"Tell me. How do you reproduce?”

“I beg your pardon?"

"How do you reproduce?"

“Okay, I reproduce asexually, by dividing into two, then two into four, four into eight, eight into sixteen, and so on. How about you?”

“So, what is the difference?”

“Are they differentiated or identical?”

“Are they mutually competitive or cooperative?”

“Mutually competitive, for food - bacteria mostly, if not other amoebae. And what about your descendants? Are they detached or attached?”

“They are attached to each other.”

“So they can't crawl about as we do?”

“So, they don't even have the freedom of movement? Then I don’t see how you can teach me anything.”

“Here is how. Unlike your descendants, mine will be differentiated in relation to each other, both structurally and behaviorally. And though they will be stuck fast to each other, they will share a discontinuously higher level of collective freedom.”

"Of course not, since you have no facility of sight."

“My apologies. Okay, let me explain. Some of my descendants will become eyes so all can see the sights of your Heaven; others will become legs so all can walk with gigantic strides; some will form protective armor so all can live in the rarified atmosphere; still others will become wings so all can fly in the heavenly winds, not just from pond to pond, but clear over the mountain, not at your amoebal speed of a meter per day, but at 100 kilometers per hour. A quantum leap in power if you've ever imagined one.”

"Wow! What kind of a god that would that make?" 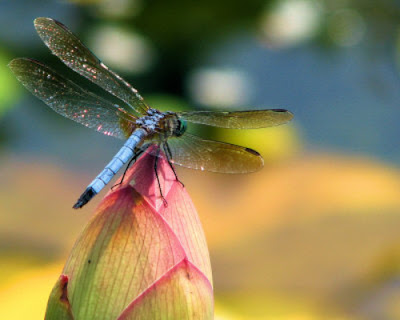 "A DRAGONfly, sounds formidable. How big is it?"

"On your scale, immense, like a spaceship, one that can delivery its own millions of highly social crew members out of this pond into your Heaven, there to live together as one, as the living dragonfly itself."

"Can you take me along?"

"I would love to, but I can't. You are a non-social cell, and do not qualify. You'll have to socialize yourself first."

"What do you mean 'socialize'? You mean to get my kids to stick together, differentiate and cooperate? That'd never happen."

"Not for a billion years or so."

"But from what I hear, amoebae never die, they just multiply forever. You'll get there one day."

"Those two huge words? You'll have to run them past me again." 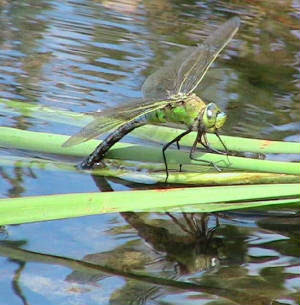 Made me smile and feel good inside. Thank you!

sent chills down my spine and goose bumps on my arms... I gather I understood the message here, thank u

I love it, thank you Anthony!

I love it, thanks Anthony!

Kim Madar
This is a Wonderful testimony on a Spell caster called DR OWOLABI that Just helped me and Brought My Ex Husband
back within 2Days with his Love spell. I am Kim Madar from United States, Life has being very Difficult for me
Since my Husband Left me and my Two Kids. My Kids and I and had being Missing My Husband and I cried almost
Everyday because of him, One Faithful Day, Someone Directed me to This man DR OWOLABI and I Contacted him VIA Email
and He Casted a Love spell for me and Told me that i will see the Results within 2DAYS, My Husband That Left me
For about 3years, Called me And Started opposing and he even sent me an apologizing Text. From that Moment,
I and My Family had being Living happily. Readers Out There, Who are in Pains and have Great Pleasure in Contacting
this Man should do that On this Email: DROWOLABISOLUTIONHOME@GMAIL.COM
You Can also Reach Him or Contact him On His NUMBER +16828086703or+2348124209863...

I want to thank Dr Emu a very powerful spell caster who help me to bring my husband back to me, few month ago i have a serious problem with my husband, to the extend that he left the house, and he started dating another woman and he stayed with the woman, i tried all i can to bring him back, but all my effort was useless until the day my friend came to my house and i told her every thing that had happened between me and my husband, then she told me of a powerful spell caster who help her when she was in the same problem I then contact Dr Emu and told him every thing and he told me not to worry my self again that my husband will come back to me after he has cast a spell on him, i thought it was a joke, after he had finish casting the spell, he told me that he had just finish casting the spell, to my greatest surprise within 48 hours, my husband really came back begging me to forgive him, if you need his help you can contact him with via email: Emutemple@gmail.com or add him up on his whatsapp +2347012841542 is willing to help any body that need his help.
For more details about Dr Emu visit his Website: http://emutemple.website2.me/