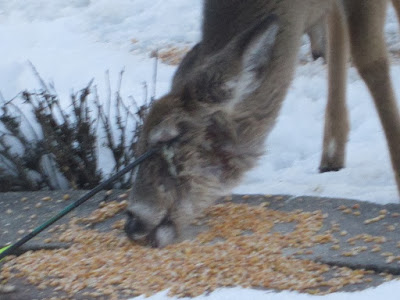 The latest campaign against culling as a means of deer population control is at the Royal Botanical Gardens in West Burlington, Ontario, Canada. Recent campaigns in Canada include those in British Columbia, notably Victoria and Invermere. Over the years, I've been involved in many such campaigns in the United States, including Ohio, Pennsylvania, New Jersey, New York, Connecticut and Maryland, either in person with local activists or via the internet as an "expert" advisor or consultant.

Almost all such cases have a political elements, local politics usually. In the case of the Royal Botanical Gardens, it is the Haudenosaunee Nation having been engaged to execution the plan by means of crossbows. These aspects I usually leave to the local groups to address. What I usually address is the physical aspect, which is universal from case to case.

First of all, as a population control measure, CULLING simply does not work. There is a factor known as the COMPENSATORY REBOUND EFFECT that the simple-minded, or the super-devious, inadvertently or deliberately leave out of the equation. Without it, the picture is over-simplistic: "If the population is too high, cut it down to size." With the Compensatory Rebound Effect factored in, we'll see that halving the population will double the food supply, which in turn will double the birth rate (does having twins or triplets rather than singlets due to richer food supply), which in turn will cause the same problem year after year.

There are of course people who will continue pushing for culling as a means of deer population control, including bow-hunters, natives, and "tulip lovers", each having their own agenda. The bow-hunters, for example, are relentless in forcing their way into urban and suburban areas where the use of firearms is prohibited. And they do so by hook or by crook, as photographically evidenced in my blog on the case at the Trexler Wildlife Preserve near Allentown, Pennsylvania:

by which you could be enraged not only due to the bloodshed, but the public deception colluded upon by the local government, the local media, and the bow-hunters themselves. In many cases, it is the bow-hunter who is the prime driving force, the primary agenda in this case being the expansion of bow-hunting, other than simply providing for his blood lust. Another one is the notorious Anthony DeNicola, who makes a handsome profit out of being a wildlife exterminator, charging around $400 to shoot a deer, last I heard, times hundreds of deer per town times dozens of towns, year after year; he was the operator contracted to eradicate, and I mean down to the last member, all the Fallow and Axis deer from the Point Reyes National Seashore in Northern California, by means of aerial shooting from helicopter. But that is another story.

My own alternative solution? Very simple, really, so simple I'm amazed that no one has put it to use after all these years since I conceived it, in spite of my repeated presentations to various city councils and county executives.

It is called QUANTITATIVE BUCK/DOE SEPARATION.

The idea is simply that if the bucks and does cannot physically get together, they cannot mate. The objective is to control how many does in the local population that will not be impregnated. Once this number has been determined - by a biologist - then a BUCK/DOE SEPARATOR would be constructed to actualize this number.

As a device a BUCK/DOE SEPARATOR cannot be simpler. It is nothing but a small piece of land ideally half-woods/half-pasture contained by deer-fencing punctuated by baited inward one-way gates. These gates should be wide enough for a doe to go through, but not a buck with wide antlers. Thus, only females can enter and their number can be monitored. Once the desired number is reached, the one-way gates would be locked. 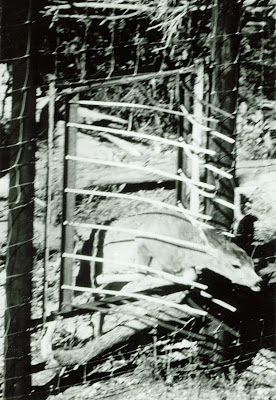 Deer society has it that the females stay put and the males roam around. So, being contained in a fair sized enclosure, say an acre or so, as long as food supplements are provided, would not cause much distress for the does, especially since they were not coerced into the enclosure but entered on their own accord, nor would it damage the environment. The bucks could go chasing the remaining does somewhere else. Plus, the does in the enclosure need not stay there forever; only during the rutting season.

As you can see, this is inexpensive, labor-unintensive, effective and humane.

The only problem is: The hunters will oppose it, and the DNRs will capitulate to the NRA, and another round of culling will commence, unless of course this vicious cycle is broken some place. And there is no one who can break it but us.

A1. All sexually mature male deer grow antlers as far as I know, though the sizes and point numbers vary, as well as the time when a deer sheds them. There are a few general principles:

i. In any given year, the buck collects the necessary ingredients for growing antlers over a 9-10 months period, and store them in the skeletal system, whereas the period of vigorous antler growth covers only the last three months of the period.

iii. During the rut, bucks do not eat, so the food availability during that time does not affect the condition of the bucks and their antlers.

v. Antler size does depend on nutritional conditions to an extent. If in the pre-antler-growth season the buck is under-nourished, they will prioritize in favor of building the body itself first, and the antlers second. But since (as mentioned above) the antler calcium is derived from the skeletal system and not directly from the food, the antlers will still grow - only on a smaller deer.


Q2: Could a buck get its antlers caught in the gate and would it be relatively easy to disentangle him.

A2: Use only the gate itself widely framed by plywood, with no netting involved. If a deer's antler is entangled in a net or a mesh, it would be difficult to disentangle without tranquilizing the deer first.


Q3: Will the doe/buck separator work equally well in suburban/semi-rural, wild areas?
A3: The Buck/Doe Separator principle can be applied to all kinds of settings, though each has to be custom designed to suit its background's physical and ecological parameters.


Q4: Do you have any data on its use and results.
A4. I have used a similar device called the Auto Deer-Assembler in India to round up those Chital deer that had spilled out of the tiger reserves into the surrounding agricultural areas. It has never been used in America due to pro-culling and pro-hunting opposition.

Q5: What about young bucks with small antlers. If they could pass through the one-way gates, they could impregnate the does in the enclosure.
A5: The hole in the plywood frame of the one-way gate has to be precisely shaped and sized to admit deer with NO antler. Whereas female deer can be sexually mature as early as 6 months old, bucks do not become sexually mature until 1.5 years old, when they will have a set of antlers about 25% the wide of a 6 year-old's, and given any rutting season, they usually mature towards the end of the rut.


Q5: Did any bucks get through the baited gates when they lost their antlers, possibly.
A5: N/A


Q6: Any data on population growth when used compared to no intervention or contraception or culling.
A6: N/A